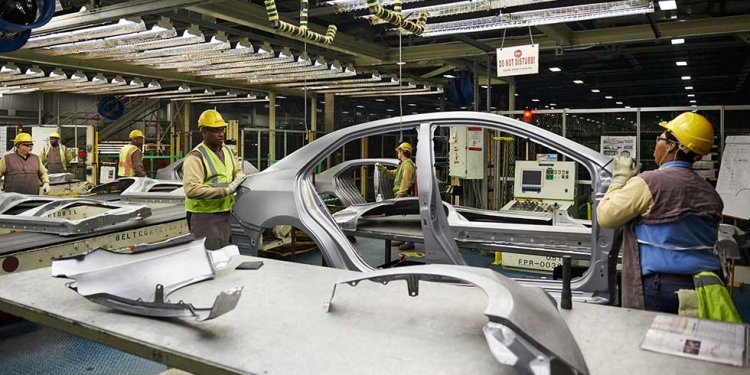 A production system which is steeped in the philosophy of "the complete elimination of all waste" imbuing all aspects of production in pursuit of the most efficient methods.>

Toyota Motor Corporation's vehicle production system is a way of "making things" that is sometimes referred to as a "lean manufacturing system" or a "Just-in-Time (JIT) system, " and has come to be well known and studied worldwide.
This production control system has been established based on many years of continuous improvements, with the objective of "making the vehicles ordered by customers in the quickest and most efficient way, in order to deliver the vehicles as quickly as possible."
The Toyota Production System (TPS) was established based on two concepts: The first is called "jidoka" (which can be loosely translated as "automation with a human touch") which means that when a problem occurs, the equipment stops immediately, preventing defective products from being produced; The second is the concept of "Just-in-Time, " in which each process produces only what is needed by the next process in a continuous flow.

Based on the basic philosophies of jidoka and Just-in-Time, the TPS can efficiently and quickly produce vehicles of sound quality, one at a time, that fully satisfy customer requirements.

-Quality must be built in during the manufacturing process!-

If equipment malfunction or a defective part is discovered, the affected machine automatically stops, and operators cease production and correct the problem.
For the Just-in-Time system to function, all of the parts that are made and supplied must meet predetermined quality standards. This is achieved through jidoka.

Producing quality products efficiently through the complete elimination of waste, inconsistencies, and unreasonable requirements on the production line.
In order to deliver a vehicle ordered by a customer as quickly as possible, the vehicle is efficiently built within the shortest possible period of time by adhering to the following: