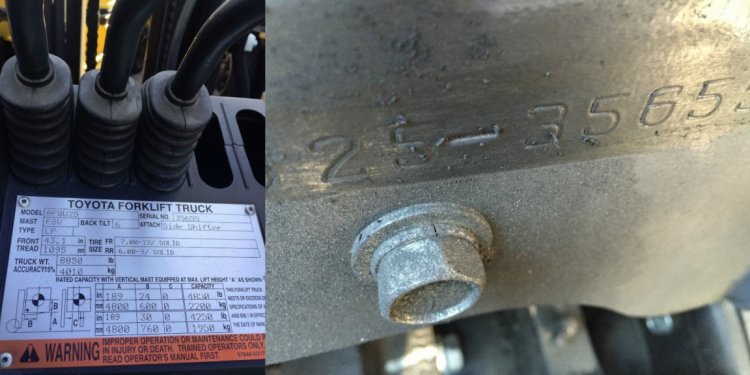 While your vehicle identification number (VIN) isn’t the secret key to an amazing array of data, it can be used to figure out the year, make, model, trim package, engine size, and transmission type of any vehicle. If you’d like to decode your VIN, here’s a basic guide.

First, you need the number. Your Toyota’s VIN is 17 digits, and it’s printed in a few different locations:

You can also find the VIN etched on your vehicle’s window glass (something a lot of vehicles have), under the spare tire, printed on the engine block, or even stamped in the metal above the vehicle’s rear wheel (driver’s side). Last (but not least), your insurance card and/or vehicle registration will have your VIN as well.

The first three digits in the VIN correspond to the make, model, and manufacturer.

The fourth digit represents the safety features on the vehicle.

Digits five thru eight represent the vehicle trim level or series, engine, and frequently (but not always) transmission.

The ninth digit is a little like those magnetic strips in paper money: it’s a “check digit” designed to verify the authenticity of the VIN. It’s determined using a mathematical formula that involves the other numbers in the VIN.

Digit 10 represents the year that your particular model of Toyota was introduced, while the eleventh number is a way to determine which factory assembled your vehicle.

Finally, the last six digits numbers used by Toyota to identify the vehicle internally. While these digits are often assumed to indicate when a vehicle was produced (i.e. 000001 would be the first car produced, 000002 would be the second), this is not always the case.

For the 10th digit, these are the model years corresponding to the year of production: