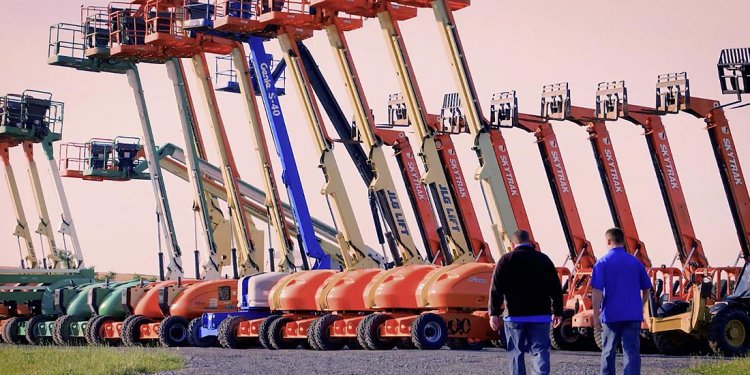 JCB today signaled its intent to become a major player in the $8 billion powered access market by adding to its line for the first time a range of new, JCB-designed electric scissor models. The company says it will add machines to the initial nine scissor lifts to expand the newly launched JCB Access product offering to a total of 27 new platforms – including scissors, articulated booms and telescopic booms.

The company has been developing and engineering powered access machines in secret for the past two years.

JCB intends to grab a slice of a market where 130, 000 units a year are sold – generating annual revenue of $8 billion.

“The access market is a truly global market and offers immense opportunities for growth for JCB, ” said JCB Chairman Lord Bamford. “It’s a market that is ripe for a new supplier with the ability to offer industry leading, round-the clock-product support. JCB’s 770 dealers with 2, 200 depots can deliver the backup that global customers expect.”

The new JCB Access products – designed in-house to meet the needs of rental companies and contractors worldwide – will initially be offered in the UK, France, Germany and North America. Access International reports that all the access products will be produced in China, where JCB has partnered with a supplier that has a dedicated production line for the products.

The JCBs Access range has been certified by TUV ensuring the highest product quality standard. It will also comply with the latest ANSI and CSA legislation.

JCB’s dealer network has been undergoing full sales and service training to be able to provide world-class support for the access platforms. JCB’s LiveLink telematic system will be standard equipment on all booms, and available as an option on the scissors.

By the end of 2017 JCB says its range of access platforms will include:

The electric scissors are powered by four 6V or 12V batteries, with hydraulic drive. Three diesel models will be introduced later in 2017.

JCB will introduce four articulated booms in 2017, with platform heights of 49 ft. through to 81 ft. All four models will be offered with four-wheel drive and two-wheel steer, delivering up to 40% gradeability and a maximum stowed driving speed of up to 4.3 mph. These will be joined by the AJ45E electric articulating boom with a 45-ft. platform height. The electric model has two-wheel drive and two-wheel steering, with up to 30% gradeability.

The AJ50D diesel articulating boom is powered by a Perkins engine, while the other three articulated models and all telescopic models use the JCB by Kohler engine already proven in many of JCB’s compact machines. These engines all meet Tier 4 Final emission standards, making them suitable for the North American and European markets. Load capacities range from 500 lb. to 550 lb.

A range of ten diesel-powered telescopic booms will also be added throughout 2017. These will offer platform heights from 67 ft. to 135 ft. There will be a high degree of parts commonality between the three model ranges.