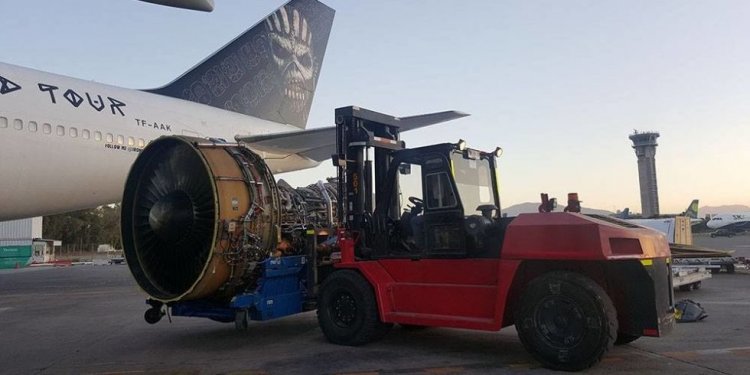 Truck with Forklift on back Harlow Essex

Bungling raiders have destroyed an entire building while trying to rip out an ATM using a digger, two lorries and a forklift truck - but still left empty-handed

The Delph petrol station in the village of Whittlesey near Peterborough, Cambridgeshire, was left close to collapse when two walls were demolished in the failed raid

In latest robbery thieves targeted the petrol station in the early hours of Tuesday.

A Cambridgeshire police spokesman said: 'It is believed there were four men there, all wearing black clothing, who managed to get away with the ATM.

'It has been reported that there were a number of vehicles used, including two trucks, a forklift and a JCB.

'A red car, believed to be an Audi, was seen to make off in the direction of Thorney/Dog in a Doublet.'

Cambridgeshire Fire and Rescue Service closed the petrol station after declaring it no longer safe for use.

He said: 'I was surprised - it's not the sort of thing you normally get in a quiet area like that.'

The station prior to the attack. Detectives in Essex yesterday said they were linking the thefts of three cashpoint machines from the Harlow area

Detectives in Essex yesterday said they were linking the thefts of three cashpoint machines from the Harlow area.

The Kent and Essex Serious Crime Directorate is investigating the incidents, which all took place at shops in the last four weeks.

A JCB digger was used to remove a cash machine from the outside wall of Martins newsagents in Harlow, shortly before 1.45am on Saturday, September 26.

It was loaded onto a waiting van or pick up truck, which left the scene with a red car, believed to be an Audi.

Up to eight suspects are believed to have been involved in the theft.

Substantial damage was caused to the wall and the machine contained a five figure sum of cash.

The JCB, which was later confirmed to have been stolen, was left at the scene and a window of a red Kia Cee'd nearby was smashed.

It followed an incident at 2am on Wednesday, September 16 when a forklift truck was driven through the window of the McColl's store in Roydon, Essex.

Up to four men are thought to have used the forklift to remove an ATM from the wall and load it on to a red Hilux pick-up truck.

The truck and cash machine were found abandoned near a cricket ground and allotments and a white Kia Sportage car was found nearby.

The pick-up, car and forklift truck had all been stolen in the previous 48 hours.

Although the ATM was damaged, the five-figure sum of cash inside remained intact and detectives believe the thieves abandoned plans to break it open because it was bigger than expected.

Police believe the gang, equipped with the digger, two lorries and a fork-lift truck, fled the two-storey, store-room empty-handed after being disturbed

Detectives are also investigating the theft of an ATM containing a five figure sum of cash from The Food Store in The Chase, Harlow.

A red Mitsubishi Shogun was reversed into the shutters at about 3.15am on Friday, August 28, causing substantial damage to the shop premises.

The vehicle was left at the scene and seized for forensic examination.

DCI Stuart Smith, of the Kent and Essex Serious Crime Directorate, said: 'We now believe all three thefts are linked and we are carrying out extensive enquiries to find out who is responsible and bring them to justice.

'There have been a number of similar incidents across the eastern region and we are working closely with our colleagues in the Eastern Region Special Operations Unit.

'As well as appealing for anyone with information to come forward, I would also particularly ask people such as taxi drivers and lorry drivers who are out on the road late at night or in the early hours of the morning to be on the look-out for forklift trucks, telehandlers and similar vehicles being driven around.

'It is unusual for this type of machinery to be on public roads at these times.

'I would also urge farmers and construction workers to make sure their vehicles are stored securely and ideally fitted with tracking devices.'

Anyone with information about the ongoing police investigation into the three thefts is asked to call the Serious and Organised Crime Unit on 101.